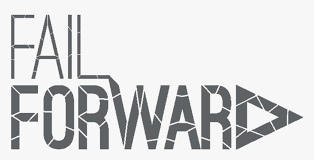 Describing the painstaking trial-and-error process that eventually led to the creation of the incandescent light bulb, prolific inventor Thomas Edison said "I have not failed. I have merely found 10,000 ways that won't work." British entrepreneur James Dyson reports that he built 5,127 prototypes of his cyclonic vacuum before reaching the one that was commercially successful.

John Maxwell is the author of 24 books on maximizing personal and leadership potential.  In his book “Failing Forward” he argues that "the difference between average people and achieving people is their perception of and response to failure."   There is no shortage of stories about highly accomplished people who overcame early failures. Abraham Lincoln lost eight elections, failed in business many times, and suffered a nervous breakdown.  The Beatles were turned down for a record deal because they were told their sound wasn't appealing. Michael Jordan cried when he was cut from his high school basketball team.  These individuals used their failures to launch success.  They didn’t become paralyzed or complacent, but rather regrouped and pressed forward.

But is it only great people who have the tenacity and resolve to overcome failure?  Can every one of us fail forward?

The Midrash notes something fascinating about the Torah’s description of the first day of creation:

Rabbi Judah b. R. Simon said: "'Let there be evening' is not written here, but 'And there was evening'; hence we know that a time-order existed before this." Rabbi Abahu said: "This proves that the Holy One, blessed be He, went on creating worlds and destroying them until He created this one, and declared, 'This one pleases Me; those did not please Me.'" Rabbi Pinchas said: "This is R. Abahu's reason: 'And God saw everything that He had made, and, behold, it was very good' (Genesis 1:31). This pleases Me, but those did not please Me.

Is this meant to be taken literally?  Is R’ Abahu asserting as a historical fact the existence of previous worlds that were destroyed? And if it didn’t occur, how are we to understand the metaphor that God created and destroyed worlds?  Hashem is infinite, omnipotent and perfect.  If so, what does it mean for Hashem to create and destroy until He got it “right” or to a point of His satisfaction?  Could Hashem not envision and create a correct world from the start?

Rabbi Soloveitchik explains that of course Hashem is perfect and could have created the correct world from the start. But He chose not to in order to set an example, a model, and a precedent for all of us.  If Hashem could “need” to start all over again, if He could fail forward and begin anew, then we can, too.

Indeed, the Talmud (Pesachim 54b) tells us that seven things were created before the world was created and one of them is teshuva.  Before man existed with the capacity to make mistakes, the process of repairing, redefining, and returning was already prepared for us.   If we anticipate complete perfection in our lives, our expectations will inevitably and invariably be shattered.  Perfectionism is counterproductive and ultimately damaging.

While we don’t strive for failure, we embrace it and learn from it.  Winston Churchill said it most succinctly: “Success is going from failure to failure without loss of enthusiasm.”

Bereishis barah Elokim can be understood not only to mean “In the beginning God created,” but also to highlight one of the greatest gifts He created and gave us is “Bereishis” itself – new beginnings, fresh opportunities.  God made it possible for us to begin again, it all depends on our attitude.  In her book “Mindset,” Carol Dwek contrasts the growth mindset and the fixed mindset.  She writes, “In the fixed mindset, everything is about the outcome. If you fail—or if you're not the best—it's all been wasted. The growth mindset allows people to value what they're doing regardless of the outcome.” She powerfully reminds us that “becoming is better than being.”

Rabbi Soloveitchik shared his insight in 1957 while reflecting on the world following the Holocaust.  Like Hashem at creation, many worlds had been destroyed, but The Rav encouraged that we must imitate and emulate Hashem, regroup and create again.

While we are several generations removed from the Holocaust, there are people today who have seen aspects of their world destroyed at different points in their lives.  For some, financial security, savings, investments are gone.  For others, the time, energy and effort that have gone into relationships feel wasted.  We cannot and must not despair or become despondent.  We cannot look at a “destroyed world" and see it as the last step in the process instead of the next step towards creating another world. We must follow in the footsteps of the Divine and fail forward.