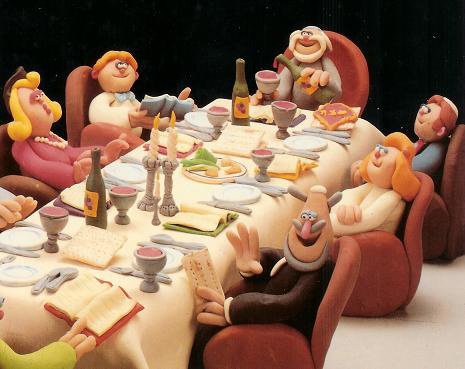 According to the 2013 Pew study, while only 23% of American Jews said they attend religious services at least monthly, 70% reported that they participate in a Seder on Passover. More than any other holiday, Pesach brings family together. These reunions are often filled with promise and hope of quality time that will yield only the most positive memories. In reality, however, it can be difficult to be with lots of people in cramped quarters for numerous meals that go on for hours without some conflict, competition, or quarrels arising.  After all, they say the definition of a dysfunctional family, is any family with more than one member.

An unusual custom regarding matzah is very instructive as to how to prepare for a family Pesach together:

The holiday of Pesach, and the Seder in particular, are brought to us by the number four: four questions, four sons, four cups of wine. And yet, when it comes to matzah, we have three. Why?

Many explanations have been offered:

We have come to take it for granted that there are three matzahs, but Sefer Minhagei Yisroel by Professor Daniel Sperber of Bar Ilan references a fascinating custom. In the 17th century, the practice was to have four matzahs at the seder, not three. Rav Yaakov Reischer was a dayan in Prague before being called to the Rabbinate, first in Galicia and ultimately in Worms. In his work, Chok Yaakov, he mentions that the custom in his community is to bake four matzos, in order to have a spare. His commentary, published in 1696, indicates that this was the prevalent custom already at that time in Eastern Europe. In addition, there are mentions of the custom to bake four matzahs in the eighteenth century in England.

This custom was opposed by great halachik authorities, not because they didn’t like the idea, but for a technical reason. They felt the more matzah baked, the more dough necessary and the more dough necessary, the greater the chance of chametz. So, in the end, we only have three matzahs. But I believe the symbolism of the fourth is very meaningful for us as well.

Why have the fourth matzah? It was called the matzas safek. Its purpose was to be a reserve matzah in case one of the other ones breaks. But that explanation raises questions as well. Sure the matzah is delicate, but so is the pittom of an esrog and we don’t say to have an extra esrog handy. We don’t have a spare shofar, or a backup menorah. Why specifically do we have a backup, reserve matzah?

Studies show that depression and anxiety spike during holiday time. “A lot of times it’s the disconnect for many people between what is supposed to be a really warm family gathering and what it’s really like for some families,” says Dr. John Oldham, chief of staff and senior vice president of The Menninger Clinic in Houston.

Shofar, esrog, the menorah, etc. can all be accomplished and fulfilled on one’s own. There is no dialogue, no relationship, and no interaction involved with those mitzvos. The seder, in stark contrast, is characterized by haggadah – a dialogue and conversation. Pesach above all other holidays brings people together. “How many are you having for yom tov” or “How many are you having for the seder” are common questions this time of year.

We bring high expectations to our holiday reunion. This year will be great. Everyone will get along. I won’t have to compete for attention. The kids will be enraptured by the seder and not distracted. Nothing will spill. Perhaps the custom of a fourth matzah originated because we must understand going into the seder that matzah is going to break.  The Torah does not describe a utopian life. The Torah is designed to inspire and enrich our imperfect lives.

The message of the matzas safek, though we may no longer practice it, is to adjust your expectations and set yourself free. Maintaining hope in a perfect experience, relationship or holiday is exhausting and burdensome. Understanding at the outset that things will go wrong and bumps will be encountered along the way is liberating and cathartic.

Part of the seder, the order of life, is preparing for the broken pieces. A chassan and kallah, groom and bride, stand underneath the chuppah and ceremony concludes with breaking glass. It is critical before they even take leave of this most auspicious and special moment that the young man and woman realize that things will break, obstacles will be encountered, and that this is ok. We can’t control other people and we can’t control all events and circumstances. We can control our expectations and, more importantly, how we respond in turn. That ability to control and adjust our expectations is freedom.

May our lives and our matzahs remain whole, but let us be prepared for something to break and know that we have the ability to put it back together again.