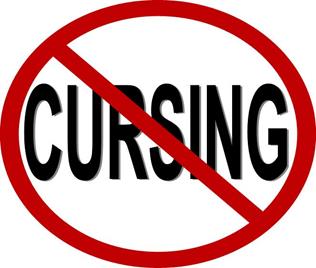 CleanSpeak profanity-filtering software, which is used by companies that host online communities and other discussion forums, says the volume of filtered inappropriate words has more than tripled in the past 18 months.  Use of profanity and curse words on Facebook rose 41% from 2019 to 2021 and 27% on Twitter.  Undeniably, people are cursing much more lately and according to an article this week in The Wall Street Journal, the pandemic is to blame.

Researchers note that stress levels are through the roof, personal and professional lives are blending together, and there is an increased culture of casualness. The combination is making people swear more. The increased pull towards profanity may be explainable, but is it excusable?

In 1952, an episode of I Love Lucy was deemed “controversial” television because it centered around Lucy telling her husband that she was expecting. The CBS executives thought using the word “pregnant” was too risqué and so they had her simply tell him they were “having a baby.”

In 1961, comedian Lenny Bruce faced his first charge for obscenity after swearing in a stand-up comedy set. After being released and arrested several more times, he was finally detained, charged, and found guilty of obscenity in 1964.

While some relics of this era still exist (in Virginia, “Profane swearing“ is a Class 4 misdemeanor punishable by a $250 fine), the world has radically changed and, with it, the environment we live in. Obscenity has gone from a crime to a legitimate form of communication.

Remember when people in positions of leadership and distinction were held even more accountable for carrying themselves with dignity and class?  GovPredict, a political analytics firm, tracked an unsurprising yet shocking trend regarding politicians and social media.  In 2014, there were 83 instances of lawmakers using profane words online. In 2017, this grew to a whopping 1,571 instances and in 2018 there were 2,409 instances.  The last couple of years has put that to shame.  According to the firm, politicians have been swearing up a storm and using words that used to make us blush at campaign stops, in press conferences, at debates and on their social media.

The result is it is no longer safe to watch an interview with an elected leader or watch a debate in front of children.  We can’t take for granted that public places will be profanity free. And the media has drastically lowered its standards. CBS, the same network that once refused to air the word “pregnant,” recently featured a show whose title was a cleaned-up swear word. Popular radio stations regularly play songs with words that as recently as 10 or 15 years ago would never have cleared censors.

Why is it so bad?  What is wrong with cursing?  Doesn’t it reflect passion, feeling, emotion?  Isn’t cursing a healthy way to find release, to respond to pain or frustration? Shouldn’t we believe the research that says cursing has positive benefits?

The answer is no.  Giving in to the urge to use a profanity is to forfeit our very humanity and indulge an animal impulse.  Our sacred Torah tells us the ability to speak, the art of communication, is what differentiates man from animal.  When we elevate it, we are acting more God-like, and when we lower ourselves to use vulgarity or obscenity we are expressing the animal part of ourselves.

In “What Swearing Reveals About Our Language, Our Brains, and Ourselves,” Professor Benjamin K. Bergen shares the research behind cursing.  For example, he describes how some stroke victims can still swear fluently even if their other language abilities are severely impaired.  Advanced language comes from the more sophisticated parts of the brain while swearing taps into much more primal neural hardware in the basal ganglia.  Similarly, Tourette’s syndrome, which involves dysfunction of the basal ganglia, can cause an overwhelming urge to swear.  The animal part of us wants to curse.  When we hold back, we are expressing our very humanity.

That is why our rabbis (Shabbos 33a) were so opposed to what they call nivul peh, vulgarity of the mouth. When we express self-control and discipline, we are imitating Hashem and we thereby exhibit dignity and class.  When we fail and give in to a natural urge to curse or swear, it is demeaning, we are diminishing ourselves.

Fighting this urge is not always easy, particularly when something upsets us, frustrates us or we are physically hurt. In today’s age, it can be particularly challenging when much of our communicating takes place through typing or texting, where we may allow ourselves to use words digitally we wouldn’t use verbally. Yet, the capacity to preserve dignified language even in those moments and those mediums is in some ways the very measure of our humanity and Godliness.

The Midrash (Vayikra Rabbah 24:7) understands the “evil matter” in the passuk “When you go out to war guard yourself from every evil matter,” as referring to cursing or using nivul peh.

The Maharal explains that nivul peh, engaging in obscenity, is so severe, even more so than other forms of negative speech like gossip, because it is used even when nobody is around; it is articulated even when there is no audience to hear.  Compromising oneself when there is no benefit is in fact the most degrading and therefore the most severe.

Using or listening to vulgarity is taking a pure, beautiful gift, the power of communication, and contaminating and spoiling it.  Whenever I hear someone curse to try to make a point, I can’t help but think if they were more intelligent they would find a more effective way to communicate that point without needing to distract with the shock value of using an obscenity.  I am always less impressed, not more, less focused on what they are saying and more focused on why they said it like that. I am less persuaded, not more.  Most of all, I am disappointed that they have chosen to transmit their contamination to me, to compromise my environment and to harm the climate that we share.

Whether online or offline, the words we say and how we say them reflect the essence of who we are and who we aspire to be.  If we make the “members of our public” judge all obscenity and vulgarity a “nuisance” and “grossly offensive,” we can demand clean speech that won’t leave emissions that negatively impact our environment for our generation and generations to come.  The pandemic is no excuse to not elevate our power of speech.  We have lost so much, let’s not lose our dignity and class.