May 14, 2014|י"ד אייר ה' אלפים תשע"ד Pesach Sheni - Give God, Others and Yourself a Second Chance By Rabbi Efrem Goldberg

The prisoners of Buchenwald never dreamt they would be given a second chance. They didn’t know if they would survive that day let alone what life they would ultimately lead. Of course when imprisoned they could not observe any Jewish holidays including Pesach. They couldn’t partake of the matzah, marror, seder or hagadah and never imagined celebrating a transition from slavery to freedom again.

“Vayehi ha’anashim asher hayu t’mei’m l’nefesh adom v’lo yochlu la’asos ha’pesach ba’yom ha’hu va’yikrevu lifnei Moshe v’lifnei Aharon.”   It was one year after the Exodus and the Jewish people have settled in to their new routine of freedom and emancipation. They are commanded to once again sacrifice a lamb, eat matzah and celebrate liberty, but this time not in anticipation of leaving. Instead, pesach is to be the annual commemoration of the transition from slavery to freedom.

Pesach was a national celebration, a remembrance of the birth of our people and the large family we all are. But, there was one group that felt on the outs. They did not participate in Pesach and therefore felt very disenfranchised and excluded from the community. Vayomru ha’anashim ha’heimah elav anachnu t’mei’im l’nefesh adom, lamah nigara l’vilti hakriv es korban Hashem b’moado b’soch Bnai Yisroel.   This group came forward and said at the time of Pesach we could not participate in the sacrifice because we were impure having had contact with a corpse. Lamah nigara, why should we be denied this experience?

Moshe advances their legitimate grievance to Hashem and Hashem responds positively by introducing the laws of Pesach sheni. On the 14th of Iyar, exactly one month after the Pesach sacrifice was offered, the group unable to participate was given a second chance, a pesach sheni.

Rabbi Ari Kahn of Bar Ilan University suggests that perhaps the answer lies in why these individuals were impure and from whom they contracted that impurity. The gemara sukkah 25a quotes a few opinions. One says they were occupied with burying an anonymous corpse not being tended to by anyone else. In the merit of their commitment to the highest chesed, the ultimate kindness, they were given a second chance. Another opinion says they were impure from contact with the coffins of Nadav and Avihu, Aharon’s two sons who died tragically and seemingly prematurely. The final suggestion is that it was the individuals who had carried the coffin of Yosef from Egypt in fulfillment of the promise to bury him in the Holy Land.

The Midrash in Shemos Rabbah sees the final opinion as the most correct and authoritative and seeks to prove the connection between Pesach Sheni and Yosef Ha’Tzadik. These individuals stepped forward and said we have been fulfilling the promise to Yosef Ha’Tzadik and have carried his remains on our shoulders through our travels in the desert. For making good on a promise to our Patriarch we are excluded from a national celebration? Says the midrash, the gift of Pesach Sheni and the second chance it provides are in direct merit of Yosef. What is the connection?

Think about Yosef and his life. This handsome, charismatic young man had alienated his brothers to the extent that they contemplated killing him, threw him in a pit with snakes and scorpions and ultimately sold him into slavery. Yosef was isolated from his family, on his own and far from the greatest influence in his life, his father. Despite the challenges he faced, Yosef rose to greatness in Egypt and became the second most powerful man in the strongest empire in the world.

When his brothers found themselves in Egypt appealing to Yosef for food, Yosef could have let them have it. When he finally revealed himself, he could have told them off, put them in their places, denied them assistance and in fact, have them killed in retribution. What does he do instead – he gives them a second chance. He revisits the relationship and allows them back in to his life.

Pesach Sheni is given in the merit of Yosef because courageously, bravely and with tremendous humility, Yosef introduced us to the idea of second chances in interpersonal relationships. Perhaps it is for this reason that when the group came to Moshe to register their complaint they phrase it as lamah nigara l’vilti hikriv es korban Hashem b’moado b’soch Bnai Yisroel, among the Jewish people. They wanted to feel connected, together, unified with the nation and community. After all, how did the slavery in Egypt begin – it was because Yosef was sold into slavery, violated by his brothers, dismissed, discarded, marginalized and condemned by his own brothers.

Despite being scorned, Yosef gave the brothers a second chance because he wants the family to be whole. Now, those who carried Yosef’s coffin, also carried on his mission and vision and came to Moshe saying, we want to be b’soch bnai yisroel, we want to be included in the nation so our people are whole and complete. Hashem’s response – Yosef gave a second chance, and therefore so will I. Here is Pesach Sheni.

Last March, a very special Rabbi left this world at 95 years old. Rabbi Herschel Schacter z’l, father of Rabbi JJ Schacter, led a remarkable life. He graduated Yeshiva University in 1938 after studying under Rabbi Moshe Soloveitchik and in 1941 he became the first musmach of the Rav.   He was a former chairman of the Conference of Presidents of Major American Jewish Organizations and served as the Rabbi of the Mosholu Jewish Center in the Bronx for more than 5 decades.

Most notably, Rabbi Schacter served as a chaplain in the Third Army's VIII Corps. during WW II and was the first US Army Chaplain to enter and participate in the liberation of Buchenwald in 1945.

I share this with you firstly because Rabbi Schacter deserves to be spoken about. I share it today because Memorial Day weekend, a time we think about those who served in the American military is the perfect time. And I share it with you now to tell you about what Rabbi Shacter did on April 27th, 1945. 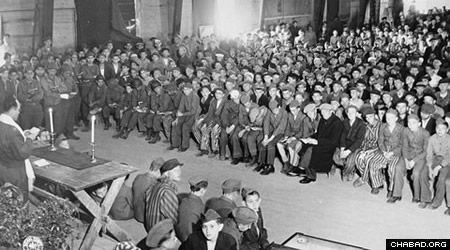 In Buchenwald on that day which was after the liberation, Rabbi Schacter led a Pesach Sheini Seder. Hundreds of individuals who were t’meiim l’nefesh adom, who had direct contact with death and who were denied the opportunity to celebrate pesach, gathered to experience Pesach Sheni. That incredible seder was likely the first Pesach Sheini Seder since the time of the Beis HaMikdash.   Just imagine for a moment a barrack filled with survivors, standing room only, in Buchenwald making a Pesach Sheni seder. We actually have a picture of that event and it is simply incredible.

Shiku Smilovic, in his autobiographical memoir tells the following about that day:

“All Jews were invited by Rabbi Schacter to attend services and to eat Matza, since it was Pesach Sheini that day. The second Pesach, for Jews that couldn't observe the holiday of Pesach at the proper date. Rabbi Schacter brought Matzos and distributed them to everyone. Rabbi Schacter started to deliver his sermon, when suddenly he was interrupted by a fellow prisoner. When he heard the Rabbi say, "We know what you have gone through" The man screamed and said: "No one, but no one, can dare say that he knows what we went through unless, he or she was there! Only they can say, I know what you went through!" He continued at the top of his voice with quotes from the Torah and other scriptures. He was no plain ordinary every day Jew. He spoke with authority. "Why did G-d forget about his children? And we were devastated, just because we are Jews?" he continued. "Before we make a blessing and eat this Matza. We want a Din Torah with the Ribono shel olam: Why? Why the little children? They didn't have a chance to sin yet? Why so many thousands of true dedicated Talmidei chachomim (Jewish learned men), that were sitting and learning yomam v’lyla day and night? You can take your matzos back to America. I don't want them, as far as I am concerned. The rest of you: you are free! You can do what your heart desires!" Rabbi Schacter did not interrupt the man and he let him finish. He moved his fists towards his heart and said, "Chotosi Uvisi Pushati Lefonecha: Please, may I have your forgiveness?" The man raced up to the Rabbi and embraced him for a while. The rest of us just stood there in silence, and our tears did the talking. After that scene we all decided to have some Matzo anyway. We made the blessing of al achilas matzah in unison. I am sure that this blessing was heard in heaven, and all the Angels answered Amen.”

Yosef gave his brothers a second chance despite what they had done to him.   Years later, Hashem gave Pesach Sheni to those who requested it, in his merit. And on April 27th, 1945 the survivors of Buchenwald observed Pesach Sheni and through it gave Hashem a second chance.

It is simply never too late. Many of us, like Yosef, have been hurt by our brothers. They have caused us pain, damage, or loss. A family member, co-worker, friend, neighbor or even a spouse or child has hurt us terribly and we are tempted to write them out of our lives forever. I would argue that it is unlikely anyone here has been hurt more than Yosef and yet, he gave his brothers a second chance. We can too. Don’t think a relationship is ever damaged beyond repair. Don’t severe a connection forever. If the circumstances are right, give others a Pesach Sheni, give them a second chance.

And, like the incredible heroes of Buchenwald, even be willing to give Hashem a second chance. I would argue nobody has experienced greater suffering and nobody is entitled to write off God more than Holocaust survivors. And yet, that fateful day in 1945, hundreds of liberated prisoners observed a Pesach Sheni and were willing to give Hashem a second chance. You were disappointed by God, felt abandoned, hurt, ignored - that is legitimate and those are valid feelings. But, if they could be open to giving God a second chance, so could you. Work on the relationship, rebuild, invest, talk to Him, let Hashem back in to your life and you will benefit the most.