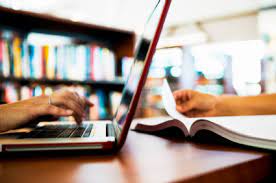 This recent headline caught my attention (as it was designed to) and intensified a question that has been weighing on me:

The internet in general, and social media in particular, has catapulted Torah learning options in our time in ways we could never have envisioned.  It is hard to imagine how we could have navigated Covid lockdowns without the benefit of technology to access Torah.  Countless websites, apps, and platforms like Zoom enable us to learn individually or come together as a community and tap into Torah anytime, 24/6, in countless languages, on innumerable topics, and with opportunities geared towards every level.

I personally am a great believer in and beneficiary of using technology to teach and promote Torah.  Long before Covid, I took advantage of social media to share articles, links to shiurim, and (hopefully) inspirational thoughts and ideas.  When the pandemic struck, like many others we pivoted online. Streaming classes on YouTube continues to facilitate people to join from anywhere in the world to watch live or at any later time that is good for them.

And yet, with all the positive, there is a much more concerning side to technology and Torah, an unintended consequence of the ability to connect and share so easily, spontaneously, and often anonymously.  Social media has certainly driven a culture of sharing and conversing meaningfully on Torah topics. But it has also generated a culture of people competing for cute, witty memes, gifs, and jokes, often invoking Torah themes and ideas. While many of these are creative and by and large harmless, they do not always reflect the sense of awe and reverence our Torah deserves.  I have watched and wondered if people are being enriched and inspired, if the Torah itself been elevated as a result of this proliferation, or is our Torah being used as just another vehicle to entertain and to compete for attention and popularity.

While I think there is a healthy debate to be had about “Frum Twitter” and more generally some of the unintended consequences of communicating Torah in casual ways on casual platforms, I would hope all would agree that the TikTok posts referenced in the headline at the top of this article are not only beyond the pale, but they are downright offensive.

A self-proclaimed atheist has taken to studying Daf Yomi and producing short videos of her “Daf Reactions.”  These reflections are designed to be provocative.  The poster doesn’t hesitate to use profanity when crudely referring to our greatest sages, the ambassadors, and transmitters of our sacred Torah She’b’al Peh.  Make no mistake, just because her posts are popular or her intentions may be sincere doesn’t mean they are appropriate; just because they have gone viral doesn’t mean they add value.

It is tempting to be excited or even proud that the Talmud and Daf Yomi are cool, they are popular, and that an unlikely source has found a way to promote and share it in a way that speaks to the younger generations.  Several in the Orthodox community have jumped on the bandwagon of praise and excitement.  But I think that is a terrible mistake.  When someone doesn’t just express doubt but openly rejects the existence of Hashem, uses profanity and vulgarity to talk about His holy gift to the Jewish people, it is not something positive, it is the definition of a desecration.  It is an appropriation of the very text and truths that she rejects.

How could one simultaneously claim to love Hashem and somehow be excited by, promote, or celebrate Torah learning propagated by someone who denies He exists?  To be clear, I write this not to attack the particular person but to challenge our Jewish social media culture that is the platform for such a phenomenon and the ease with which one can mindlessly and thoughtlessly get swept up in celebrating the very content that we should be finding deeply offensive and disturbing. (Though this should go without saying, I would be equally and unequivocally critical of a man using profanity when talking Torah or who rejects Hashem but claims to be sharing His Torah.) Put another way, my concern is less about the poster and her “Reactions,” but the overwhelmingly positive and supportive reaction to her “Reactions.”

Why should Torah study call for fear and dread? Isn’t Torah to be learned to gain insight and understanding? Isn’t the ultimate goal of Torah study to assimilate the Torah’s worldview into one’s personality? Why the need for awe, for trembling?

These emotions are appropriate because the study of Torah is a reenactment of the giving of the Torah, and the teacher is but a mouthpiece for the Giver.  For this reason, both Torah and prayer are Avodah Shebalev. Both involve standing before God. Prayer—because man’s need-awareness is so acute that he cannot keep himself from addressing the King of Kings in prayer. Torah study—because God alone is our Teacher, the melamed Torah le’amo Yisrael.

Torah is not simply an academic pursuit.  It cannot be divorced from belief in Hashem.  It is intrinsically connected with the experience of revelation, it is meant to inspire a sense of contact with the Divine.  Prayer is us speaking to Hashem; learning Torah is Hashem speaking to us.  Sharing Torah while denying the existence of the author and authority of Torah is profaning and desecrating our sacred Torah.

Consider, in contrast, a ruling of the Rama (o.c. 48:1), Rav Moshe Isserlis, who teaches us the proper posture when learning Torah.  He writes that to recall that the giving of the Torah was with people trembling, the custom is to shukel or sway when studying Torah.  We are meant to bring the highest level of reverence and respect to the study of Torah, to invoke and emulate the awe and trembling from when it was first given.  We must be mindful and demonstrate that learning or sharing Torah is not a casual exercise or experience.

Once, Rav Elyashiv zt”l had not yet reviewed shanayim mikrah v’echad targum, he hadn’t completed his study of the parsha.  When his grandson asked him what he was waiting for, he replied, “how could one review the parsha without wearing his jacket?”  The grandson brought Rav Elyashiv his formal garment and only then did he return to reviewing the parsha.

I am not saying that we have to dress formally when studying or posting Torah, nor am I opposing the brilliant efforts of many people around the globe who make Torah approachable, relatable, and come alive for audiences who need an extra push or who are not instinctively drawn to it. On the contrary, modern technology, including graphics, videos, and all manner of multimedia, has added incalculable amounts of learning and value to the Torah world. But it is critical that no matter the forum or medium, we must at all times have respect, dignity and pride.

By design, it is hard to take a moment of reflection before posting, liking or following on social media. But I encourage anyone engaging with Torah on technology to really consider as they scroll: is this content kosher and its messaging meaningful and inspiring, or is this just entertaining and amusing?  Am I contributing to kavod HaTorah, elevating the respect and veneration of Torah, or God forbid dumbing it down? Am I posting to connect people to Torah, or promote myself? Am I contributing to making Torah a gimmick or shtick, or am I demonstrating the proper reverence for our most sacred authority?